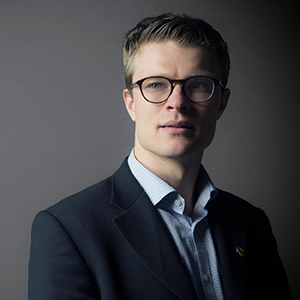 And as an inventor, engineer, medical student, PhD graduate and recent lead developer of the Alzheimer’s XPRIZE, he speaks from experience.

As a student in the MD/Phd program at the University of British Columbia, where he is pursuing a medical degree and has completed his PhD in engineering, Edgcumbe has helped develop many new medical technologies: an augmented-reality display of ultrasound images to help surgeons better “see” patients’ organs, and the pico lantern, a device that maps and projects a patient’s tumor(s) and blood vessels – in 3D – onto their body during surgery.  He is also co-founder of Lume Biotics, a company developing a device for phototherapy treatments of antibiotic-resistant infections.

“We need physicians across Canada to stay curious, keep their thinking hats on and fully embrace that they could be staring at a transformative discovery or idea, and not be afraid to pursue it.”

It’s Edgcumbe’s recent work as the project lead for the Alzheimer’s XPRIZE that has expanded his innovation mindset even further, a mindset he will share as a panelist at the CMA Health Summit.

“Medicine is still an empirical, observation-based science. There are still some things we don’t understand about the human body, and many breakthroughs have come through some very unlikely sources,” says Edgcumbe.

“We need physicians across Canada to stay curious, keep their thinking hats on and fully embrace that they could be staring at a transformative discovery or idea, and not be afraid to pursue it.”

Edgcumbe believes there is a lot that innovators can learn from the XPRIZE model and how it’s use of prize-based competitions, crowdsourcing and exponential technology encourages teams to look for solutions in unexpected places.

As the project lead for the Alzheimer’s XPRIZE, Edgcumbe’s job was to apply innovation principles to ending Alzheimer’s, a disease he characterizes as “the economic, emotional and social sinkhole of the 21st century.”

“Right now there are about 30 million people in the world with Alzheimer’s, and that number is projected to grow to over 100 million by 2050.  As of today, there is no cure or effective treatment for Alzheimer’s,” says Edgcumbe.

In the end, his work identifying market failures in the Alzheimer’s’ space, building a coalition of scientists willing to challenge the status quo, and fundraising $25 million secured his team top priority for launch in 2018.

But will it lead to a cure for Alzheimer’s?

Maybe not. But Edgcumbe says that was another lesson he learned from his XPRIZE experience – that innovation needs to start with a “big vision” and a willingness to tackle large-scale issues.

He uses a story about Dean Kamen – the renowned engineer and inventor of the Segway, a man who holds more than 500 patents and sits on the XPRIZE Board of Trustees – to make his point.

Edgcumbe interviewed him shortly after Kamen had received $80 million from the US Department of Defense to create the Advanced Regenerative Manufacturing Institute (ARMI), an institute with a mission to manufacture engineered tissues and artificial organs on a large scale. Although a prolific inventor, Kamen has no background in regenerative medicine.

“So I asked him `How do you know it is going to work?’ And he said `Well, I don’t know, and that is what makes it an interesting challenge.’ And that really resonated for me. I think it is about taking on the problems for which we don’t know the answer, for which there is a challenge – technically, societally – that’s where the real learning and growth opportunities are.”